Blame Game EXP featuring Harry Shotta is a pioneering 20-minute music experience comprising four tracks and five-part audio-only cinematic scenes. This piece explores socio-economic issues such as crime, poverty, deprivation, and mental health. The story is told from different perspectives reflected in the lyrics and narrative transitions that help the audience to better understand the complexity of the depicted relationships.

The aim of this collaboration was to bring together conventional music production and songwriting with the narrative sound design and new generation immersive audio technologies usually associated with cinema and gaming.

The use of spatial sound design for narrative components and cutting-edge Dolby Atmos audio format for music mixing brings the audience face to face with the stories unfolding throughout. Blame Game EXP showcases the true potential of immersive storytelling to on-demand music streaming. 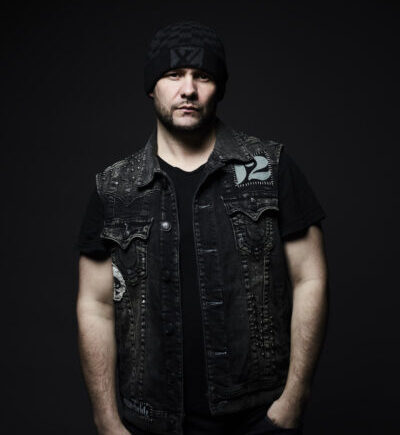 Harry Shotta is an award-winning international MC who has travelled the globe touring since he exploded onto the Drum N Bass scene. He is a Guinness world record champion achieving the title of ‘most words on a song’ beating Eminem’s ‘Rap God’ back in 2017 with his epic display of double-time speed rap on ‘Animal’. Harry has also written the first Rap AR experience ‘Consequences’ which was launched at the Future Of Storytelling Festival in New York in 2018. This was followed by a showcase sponsored by Bose at the Raindance Immersive festival in 2019. Continuing his passion for weaving storytelling into musical soundscapes, Harry’s latest journey into thought-provoking lyrical narratives finds him breaking down the story of a troubled boy over four different tracks.

Starting with the ‘The Joker’ we hear the story from the perspective of an abused child screaming out for help from those around him. Due to the lack of support and the continued mental and physical pain subjected to the innocent child, we learn of the repercussions and the potential ramifications of a child ignored hellbent on revenge.

On ‘Nosey Neighbour’ we see the perception of the child growing up through the eyes of his neighbour, who gets an inkling that something isn’t quite right but sadly decides to look the other way. This track also features the thoughts of the local shopkeeper who witnesses the child being bullied and physically beaten by other children and although he initially wants to help he comes to the conclusion that it’s ‘none of his business.’

‘Stuck In A Trap’ is told through the eyes of the boy’s stepfather who breaks down his side of the story over a haunting backdrop. This is perhaps the most telling of the four tracks and really exposes the daily ritual of mental and physical abuse the focal point of the EP had to endure before eventually striking back.

The grand finale of the EP ‘Michael Green’ is set at the scene of a live news report of a violent crime where local residents find themselves thrust into a media spectacle. In the midst of a heinous murder, the participants and the listener are asked the question of who is really to blame for the chilling outcome of the story of ‘Blame Game’.

We produced a spatial mix with the channel beds and objects across the spatial audio resolution of the 7.1.4 Dolby Atmos layout. This playback method offers true 3D audio either on speakers or headphones. In comparison to more traditional surround formats, it offers elevation as well as the Head-Related Transfer Function (HRTF) which is an essential component when it comes to simulating how we perceive and navigate the real world. HRTF is a set of filters that represent human anatomies, such as the size and shape of ears and head. Once extrapolated in the form of an algorithm, it is used in real-time during the playback of the content. This effect was enhanced for the narrative components and reduced on musical parts to maintain contrast between spatial perspective environments as well as timbral fidelity of the music.

Dolby Atmos is currently supported on the Apple Music platform along with several other major music streaming platforms. We believe that in the immediate future more and more members of the global audience will gain access to this content as the evolution and adaptation of immersive audio continues across the industries. Furthermore, we are very excited about the introduction of a head-tracking feature on a number of consumer devices. This technology is typically built into earphones or headphones that work wirelessly through Bluetooth. The head-tracking gives 3 degrees of freedom (3DOF) movement in relation to a centre-stage of the content thus adding another dimension to the listening experience.